Get excited… very excited.  The 2014 Tassie titles are coming.  The next five weeks will see both the Tasmanian 1/10 electric, on and off road titles being run in Hobart at 137 Howard Road, Goodwood.

The Southern Tasmania Model Car Club (STMCC) will host the 2014 EP10 Tasmanian Onroad State Titles the weekend of March 8/9.  This will see local drivers joined by interstate racers in a variety of on-road classes including multiple touring car classes of varying speeds, mini and Formula 1.

There will be a team from Launceston R/C attending including regular on-road racers Andrew Mack, Mat and Jade Chandler and Ian Scott.  Any of them would be more than happy to answer any questions that you may have regarding on-road racing.  Unfortunately Danny Tatnell is unable to make this year’s event but rumour has it that his cars may make an appearance raced by a LRC father/son team. Hmm who could that be? 🙂

Qualifiers will be run on Saturday with the finals to be run on Sunday.  Even if you aren’t racing, take the opportunity to come and watch some on-road racing.  If you have not seen on-road R/C racing previously it is well worth checking out.  There is sure to be some great racing at what is always a fun event.

For anyone interested in entering the event, further information can be found on RCTech at http://www.rctech.net/forum/australian-events/777658-2014-ep10-tasmanian-onroad-state-titles.html
The Southern Tasmanian Model Car Club can also be found on Facebook at https://www.facebook.com/groups/504634409549777/ 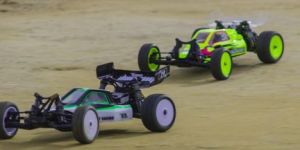 The GOMCC crew have been working overtime preparing a great new racing surface and track in preparation for the titles which will see racers compete in 2wd/4wd stock and modified buggy, Stadium Truck and Short Course Truck classes. Local drivers will be joined by some of the best racers in the country including state and national champions.

If you are interested in entering this event you will need to be quick as entries close February 7.  This will also be a great opportunity for spectators to see what is sure to be some incredible racing action with such an immense pool of talent on display.

As this is an AARCMCC sanctioned event, a control tire will be used in addition to AARCMCC’s rules governing motor and battery usage.  The control tires can be purchased from the club when filling in the entry form.  Further information about the event can be found at:
http://www.gomcc.com.au/2014-tas-titles/
http://www.rctech.net/forum/australian-events/765624-2014-aarcmcc-australia-10th-ep-off-road-tasmanian-titles-21-23-feb.html

Both of these events are well worth entering.  The fun of attending a title event is a great experience.  Whether you’re racing or spectating come and support our Tasmanian R/C clubs and soak up the atmosphere and see some great racing.  Hope to see you all there.