Full results are now available here.  And (at 11.30pm Saturday) we’ve updated this post with a race report…click through to read it!

98 cars eventually faced the starter, and with rain pounding down outside we were again glad about the roof over our head.  The age of that roof meant a couple of minor leaks, and therefore a couple of adjustments to the track layout compared to that which was practiced on during Friday night’s controlled practice session.

Rocket Rodney Houghton looked the man to beat on paper, and it proved to be the case on the track as well. Rocket simply had too much pace on board for his rivals, and revelled in the extended TC layout within the hybrid Launceston track.  A comfortable TQ was followed by three straight A final wins to seal the deal.  A highlight in this class was the day long battle between Gene Newell and David Rush.  The pair were glued together throughout qualifying and the first final, with Newell eventually getting away in A2 and A3 to wrap up a strong second place over Rush.

We’re delighted to be able to offer a class specifically for kids 13 and under, and the crew assembled to battle it out today didn’t disappoint.  Calvin James was the class of the field, pushing his truck around in a time that would have had him nudging an A final berth in the senior 2wd Short Course field.  Jacob Cox improved steadily throughout the day, as did Sam Betts – the smallest driver in the field but who came home with a big finish.  All the Junior drivers did a great job, and particularly with their endeavours in marshalling – energy, enthusiasm and concentration on display.

The little front-wheel drive Mini chassis produced some of the best and closest racing of the event. With 13 cars fighting for 10 A final positions, the pace was on right from the first moment. Andrew Mackenzie and Lee Harvey stood tall, swapping wins during the qualifying heats to eventually go 1-2 on the grid. They would go on to repeat the battle all the way through the finals series, picking up a win apiece in A1 and A2, before Mackenzie  put it beyond doubt with a bit A3 win. John Beggs applied plenty of pressure himself with a strong finals drive to third.

Matthew Chandler, Tom West and Ian Scott fought out the B final series, finishing in that order in both races.

The first of our senior Off-Road classes, 2wd stock features rear wheel drive buggies with standard motor/electronic speed controller packages.  Young gun Calvin James was quick out of the blocks before being overhauled by Alex John and Jarrod Painting in a sign of things to come. John smashed ’em in A1 before a horror lap midway through A2 gifted the win to a speedy Painting. A3 was AJ again, getting over the top of a quick-starting Painting and then going right on with the job, Painting second and James a brilliant third.

We don’t often see the big-horsepower Open Short Course trucks running in Launceston, but the race track reverberated to the sound of monster power today. Hobart’s Ben Hoare was the man to watch: fast, consistent and mistake free to dominate qualifying, then win A1 and A2 before sitting out A3 as the Champion elect. Phil Reibel worked his way into the event after a gentle start, but second to Hoare in A1, then a comfortable A3 win was more than enough to secure him second place over fellow Hobartian Mark Davis.

The 8th scale boys showed us just why the love the Big Bangers, even in the tight confines of the Rutherglen circuit. Local fast-guy Steve Madziara had way too much for his opponents, sweeping qualifying and all three A final races to garner the Launceston Cup win.  Queenslander Adrian Beggs was quick at times, but not quite able to sustain a challenge to Madziara, while Michael Peck would be delighted with his third place.

The Open Tenth class consisted mostly of 4wd buggies, with a sprinkling of stadium trucks and a lone 2wd buggy – all running open motors and ESC’s to produce plenty of horsepower.  It was tight early in the day before Sam Wells hit his straps. Once he found his feet it was truly game over, with the Launceston pilot having it on a string from there.  Patrick Hume (President at Launceston R/C) nailed three great finals drives to get home by a single point from GOMCC’s Ben Hoare. Steve Madziara’s 2wd buggy was a giant killer in this class, running high up all through the finals series.

19 cars faced the starter, necessitating a B final, and it was Jessie Hilder who got the better of an entertaining B final battle, with Lee Harvey (stadium truck ) and Mark Davis both quick.

No less than 27 trucks made competition for the 10 A final spots fierce. This race shaped as a confrontation between local Launceston regulars, and the talent-packed NWRCCC team….and that’s just the way it played out. North-west’s Mark Rayner started fast before a dominant Q2 secured him pole position. Right behind him would be first-time SC driver Tim Parsons, and then Launceston’s Adam Beresford and Andrew Green.  Greenie through the cat among the pigeons with an A1 win before Rayner struck back to send it to a decider. Greenie buried himself with a tough opening lap, and when Rayner managed to fend off an increasingly quick Tim Parsons, his victory was complete. Kudos to Chris Murray and Jade Chandler who drove brilliantly to find A final starts.

James Atkinson was an excited and popular winner of the B final series, getting a first in B1 while Shaun Whatley likewise stepped up with his best SC drive yet for a B2 win.

The C final series went the way of Brett Baylis, a pair of second place finishes enough to get him home over B1 winner Graham Viney and B2 victor Jacob Cox.

With the Tiger Models Launceston Cup doubling as round one of a Tasmanian interclub series, it was the local team proving too strong to get away to a quick start in this four-event series. 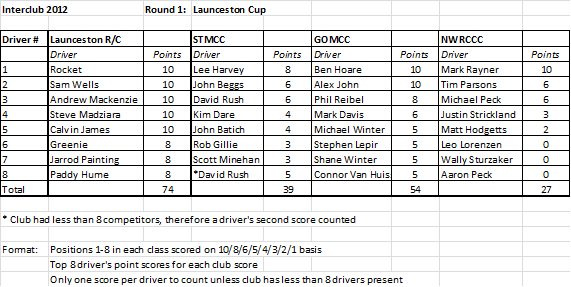 All in all a fantastic event.  A huge thanks to Tiger Models, Venom, Proline Ace Hobby Distributors and Action R/C for their assistance in putting on the event. And to the team of tireless workers led by Greenie and Paddy who built a fantastic race-track (including the gigantic and super-fun wall ride!).

We’ll do it all again in 2013, with plans already being cooked up to ensure the event is bigger and better again.